Biography of Eduardo Bonnín Aguiló, Founder of the Cursillos in Christianity 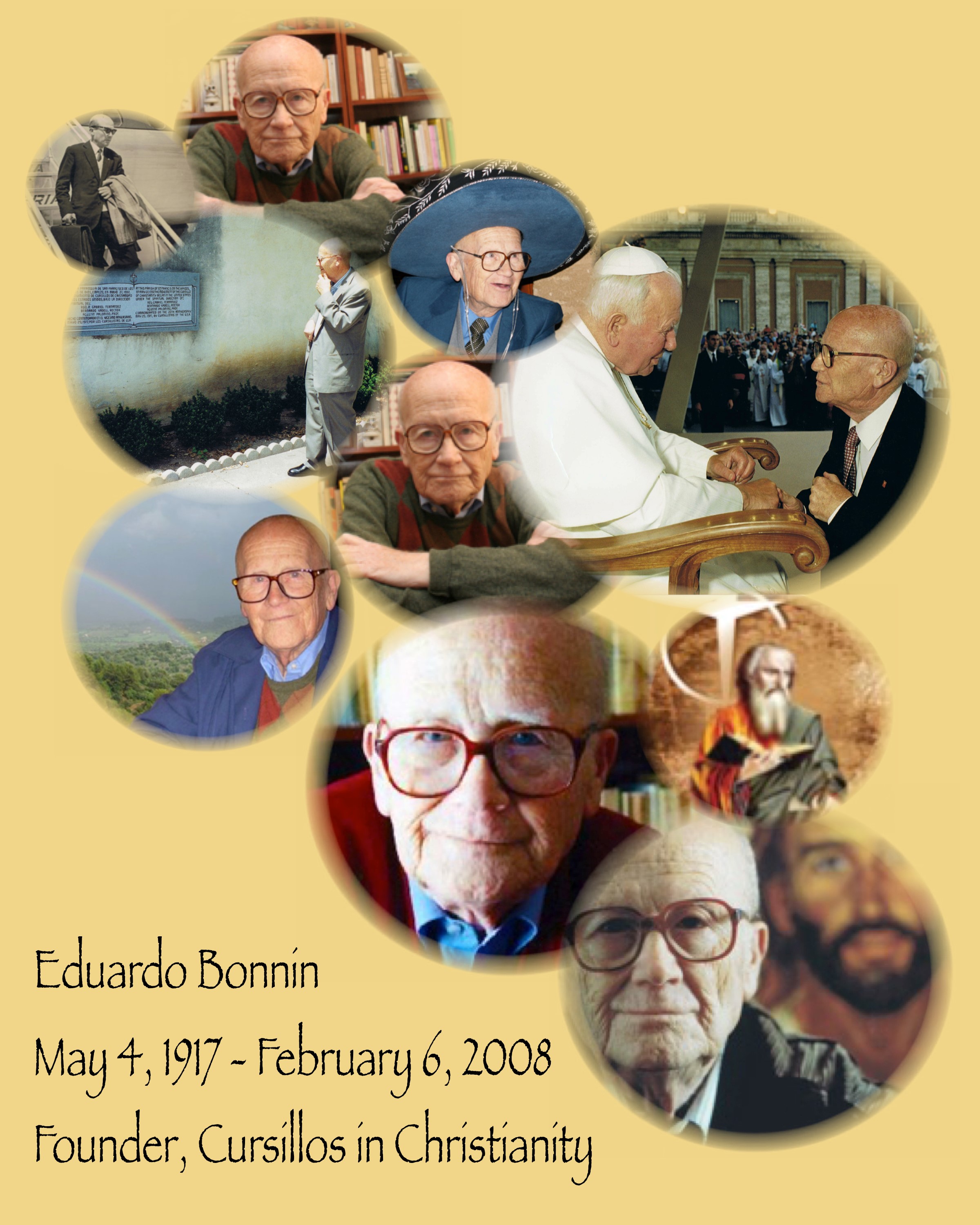 Eduardo Bonnín Aguiló was born in Palma de Mallorca on May 4, 1917 in his residential home where Bar Niza now stands. He was born to a catholic family, who was dedicated to the trade and export of grains and dried fruit in the semi-wholesale market.

He was the second of 10 children, born from the marriage between D. Fernando Bonnín Piña and Dª Mercedes Aguiló Forteza.

His first studies were at the school “Escuela Francesa” in LaSalle College, and his intellectual formation was with the Augustinian Priests, and especially with professors his parents hired to teach him at home. However, Eduardo stated that the first professor in his life was his grandfather Jorge, who taught him the love of reading. Eduardo was convinced that “nothing influenced me more than my obstinate and always growing interest for reading”.

In 1936, he had a determinant experience in his life: the obligatory military service far away from home. Simultaneously two sources of conflicting knowledge entered into his life: “reality” from direct contact with the profane people of the battalion and “idealism” from his books.

By pure providence, a text from an address given by Pope Pius XII to the parochial pastors and “cuaresmeros” in Rome, on February 6, 1940, fell into Eduardo’s hands. The Holy Father looked for “new roads”, different from what was usual in order for all, but especially that the far away know the love of God.

Three principles become the basic guidelines of Eduardo’s Mentality: the Love of God, Friendship, and the Person; especially the far away.

In 1943, at the Lluch Sanctuary, he participated in the second “Cursillo for Advanced Pilgrims Leaders”, because they convinced him. He saw that the message was good, the servants of the message seemed quite boring to him, and he said those needed to be refreshed. It was not only necessary to prepare leaders to go to Santiago, but for life itself as well.

The crucial moment in the genesis of the Cursillos in Christianity was the phase that immediately followed that Holy Week of 1943, in which Eduardo relates what was lived at the “Cursillo for Advanced Pilgrims Leaders” with his personal and profound restlessness and his catalyzing experience of the de-Christianized environments. He came to the conclusion that something, though similar and different from that “Cursillo for Advanced Pilgrims Leaders”, could in fact bring about the dynamics of Christianity; not just in an isolated predetermined event like the Pilgrimage to Santiago, but also in the daily and normal lives of real and concrete environments.

The text and outlines of “The Study of the Environments”, which Eduardo presented in public for the first time at the Diocesan Seminary of Mallorca, surged from this restlessness in 1943.

In this climate and projecting into reality the outlines of The Study of the Environments, Eduardo thought and elaborated from that experience of the “Cursillo for Advanced Pilgrims Leaders” – an entire method that would serve as Christian fermentation of the “far away” people and their environments and also as a profound revitalization of the environments already close to the Church.

Perhaps the point of inflection in attitude would be marked by the intervention that Eduardo had by the invitation of Gaya, in 1944, at the “School of Propagandists” that Gaya directed, and at which Eduardo presented the outlines that he had prepared as his final topic of “his” method, which would later be integrated as the Rollo “The Cursillista beyond the Cursillo”.

The first Cursillo, according to the outlines of Eduardo, was celebrated in a chalet of Cala Figuera de Santanyí in Mallorca from August 20th through the 23rd of 1944. The Spiritual Director of that first Cursillo in Christianity in history was Reverend D. Juan Julia, acting as Rector was Eduardo Bonnín, and as “professors” were Jaime Riutord and Jose Ferragut.

That meeting had already included the essential elements of a Cursillo in Christianity, with the exception of the first and last topics, which do not become part of the method until the 1950’s.

Eduardo has affirmed many times that since that Cursillo in Cala Figuera, and the rest of the Cursillos, he had continued to use the same outlines; the same writings, and by this wanting to prove that this was entirely an authentic Cursillo.

The second Cursillo in Christianity (which in those times was simply called Cursillo), was held at the Sanctuary of San Salvador, in Felanitx, also on the south side of the island, was celebrated in September of 1946, acting again as Spiritual Director D. Juan Julia; as “rector”, the same Eduardo Bonnín; and as professors, Antonio Ruiz and Guillermo Estarellas, two youth leaders from Catholic Action.

The Diocesan Chaplain Sr. Dameto attended the Clausura of the Cursillo of 1946, in what constituted, without a doubt, the first boost that the Diocesan church, as such, did for the new system.

The third Cursillo in history was celebrated in 1947, from the 16th to the 20th of April, led spiritually by D. Jose Estelrich, with Eduardo Bonnín as rector and one professor, Jose Segui.

In 1948 there were two Cursillos which were delivered with the new methodology, and very close in time frame. The first one was done on Holy Week, and the spiritual retreat was led by Father Amengual and the spiritual direction was done by Father Bartolomé Nicolau, while as rector was Jose Ferragut with a team of professors which included Eduardo Bonnín, Bartolome Riutort and Juan Mir.

The next Cursillo was held in the month of April, also in 1948, under the spiritual direction shared by D. Jose Estelrich and D. Miquel Sastre, and again, with Eduardo Bonnín as rector and Onofre Arbona and Antonio Salva as professors.

The Cursillo in Christianity started in August of 1944 and were officiated and enumerated starting with the one on the 7th of January of 1949. The Spiritual Director for “Cursillo #1” was D. Guillermo Payeras and the Rector was Eduardo Bonnín.

When history accelerated itself in 1949, it forced Eduardo to again reflect in depth, so that the affluence and quantity of the cursillistas would not interfere with the sedimentation of those friendship group reunions which, since 1944 were considered the most essential component of the Postcursillo. From this reflection, the methodology and design of the “group reunion” surged, almost immediately.

The annual assembly of November 1949 included a presentation about the Groups, which resolved the issue; which incorporated the weekly Group Reunion as a specific and essential element of the methodology.

The seed of Cursillo has expanded all over the world and Eduardo has gone after it, fertilizing and leavening those environments in which it has been called to grow. “I do not have a kilometer counter on my feet” was one of Eduardo’s sayings; in order to avoid reviewing the international itinerary of his life to slip away from the importance it gave him to have proclaimed the Gospel. Eduardo was in China three times. In 1966 he travelled to Brazil, New York and Peru; in 1967 he was in Bolivia, Costa Rica, Miami and participated in the 3rd National Gathering of Leaders in Guadalajara. On May 4, 1968, he attended the Ultreya of Fatima…. In 1998, after a decade, he returned to Chile and went to Tuvulu, Santiago, Valparaiso and Termuco. That year, he also travelled to Bolivia, Guatemala, Mexico and was in Ravena and Padua…

There is consistency of the leavening that was produced by that seed across the five continents.

As he would say, after an entire life dedicated to love of God and of people, he was always content, but not satisfied.

On February 6, 2008, Eduardo Bonnín passed away. He was buried in the atrium of the Capuchin church and his tombstone states the words he always said of himself: “An Apprentice Christian”.

What is Cursillo?
More Information
Go to Top